Should I go Native, Hybrid or HTML 5?

“I want it all, and I want it now.” The bombastic stadium rock anthem by Queen sums up our current attitude to accessing the web and mobile content.

HTML 5  has been described as the panacea for all mobile ills, but has it created its own raft of problems? Everyone has an opinion on which approach is the best. For every article insisting that native apps are the only possible choice  you will find a similar one stating that HTML 5 is staring down all competition.

Why is HTML5 discussed so fervently in these debates yet other web technologies are given the odd line or two. And how many of these polemicists mention the third option ─ hybrid apps?

The reality is that there is no silver bullet when it comes to mobile development. What matters are the decisions you make about the technology you use and the way you arrive at those decisions.

This infographic is interesting as it shows how much time users spend in apps versus accessing content via a browser. All statistics can be interpreted differently and it may be that they access content via apps because that’s where the stuff they want is. 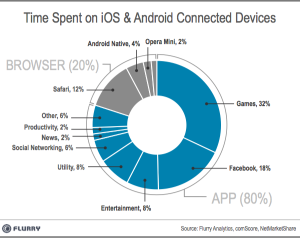 What all technologies have to contend with is fragmentation – multiple platforms which evolve at different rates, some are discontinued and others are developed. Why do people get excited about HTML5? Because it paved the way for content to be delivered to multiple mobile devices. HTML5 is simply the latest web standard protocol that defines how web content is delivered. But fragmentation isn’t restricted to platforms. In the same way that one site can look different across browsers on your laptop, supposedly cross-platform apps will render differently on mobile browsers.

If you are selling your app, some people see using HTML5 as a way of avoiding the monopoly of app stores. The most touted of these is the Financial Times app, but a large organization like The Financial Times can avoid the app store as they have a worldwide brand already. It’s debatable how a newcomer to the market can get traction without the opportunities that an app store can provide.

Let’s assume that as a company, you have decided you need content and a mobile delivery channel. Your workforce is mobile. They use tablets and cell phones to carry out their day-to-day business. So mobile is the obvious choice for delivering their training as well.

There is no right or wrong, as easily as Facebook and LinkedIn switched direction, they will switch back if the argument changes again.

For work-based learning, it may be that native or hybrid apps are the most sensible choice. By definition you have more control over devices than consumer apps. If apps are being developed for specific training needs ─ i.e. a  new product launch then the need to future proof is not so pressing. You are also less likely to need to update the app as frequently as consumer apps.

So what’s a hybrid app, and should it be the default answer? Hybrid apps marry “web technology and native execution.” They bundle web-style content in a native app wrapper so you can have the slick look and feel web technologies offer, but a native app for more reliable delivery.

The numbers are staggering. Between 35 million and 40 million native apps were downloaded in 2012, so HTML5 has a long way to go before it overtakes the native market. By taking the best bits of each technology hybrid apps are turning the tide of ever increasing native app downloads. Hybrid apps are set to rapidly increase from 2013 to 2015.

One thing is for sure ─ you will need to make a decision while everyone is still commenting on the debate.