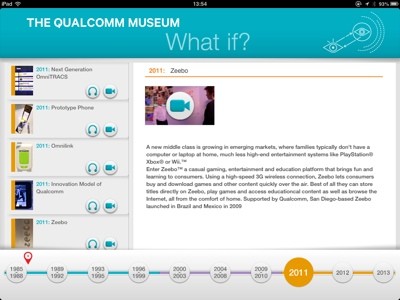 Museums are the perfect place for a mobile tour guides, but what are the current technology trends that can make these simpler to create? Discover what happened when we used Bluetooth LE to build a virtual museum tour…

GPS has transformed the way we navigate around a city, but what happens when you go indoors, where GPS can’t reach? There are several competing technologies your app could use to know where it is in a building. Some are truly location aware, while others try to understand what you are looking at. The top three methods are:

1) Signal triangulation: setting up a series of broadcasts that your phone interprets to figure out where you are. (this most often uses wifi, but there are other alternatives too).

You need to teach your app about each new building / wifi point / broadcast signal, so this approach struggles to scale up.

2) Item identification (active): In this scenario your phone has no idea where you are, but it knows what you are looking at. Typical technologies might be QR-Codes, RFID tags, Augmented Reality triggers, image recognition. In all of these cases the user needs to interact with the item. Sometimes with a dedicated app, or in the case of QR Codes, maybe only a web page is required.

This is much easier to set up, as all triggers are physical things the user points their phone at.

3) Zone identification (passive): This is what we were doing with the Bluetooth LE tags. Sending out small, localised signals that tell you which “zone” you are in. Bluetooth LE is the same technology as Apple’s recently announced iBeacons.

This is similarly easy to set up, as you just need to place beacons in each zone. The user does NOT need to know where they are, as long as their signal can reach their phones.

The advantage of passive zone identification is that you do not need to actively point at / tap / identify the object with your device – instead you get an automatic listing of items that are nearest to you.

Another related concept is Geofencing, or marking out specific regions that your app can understand, regardless of which way it gets its positional data – though this usually relies on outdoor technologies (like GPS) to know where you are

For our QMuseum Tour app we used Qualcomm’s Gimbal Proximity beacons as a passive zone identifier, which we positioned around the museum marking out our different zones. Some we hid behind the walls, and others on actual exhibits. This is easier than it sounds, since because Bluetooth LE is very low power, we could use tiny beacons (powered by a watch battery) where space was critical, and larger ones (with AA batteries, or mains power) where space allowed.

Each zone contained several exhibits, so we used Gimbal Proximity to identify which zone you were in, and then the app would highlight all the items in that zone. Originally we wanted a perfect match for each exhibit, but we found that getting that micro-level of accuracy was difficult, and in addition, the close proximity of the items in the museum meant that it was not always the closest item that our users were looking at! To manage this, we added the concept of “forgiveness” to the positioning algorithm.

Bluetooth has some features that make it challenging for indoor positioning. Signals pass through walls, but can be distorted by bodies standing in the way. Signals reach a long way, which can make it hard distinguish between 2 items close together. The strongest signal is not always your nearest beacon. Our concept of “Forgiveness” worked well here, because we showed the user all of the “close by” items in the museum, without assuming the exact item being viewed. This approximate positioning ended up being the most intuitive way to manage an interface to a passive positioning app. The app itself was developed using the free to download Gimbal Proximity SDK. This exists for both iOS and Android.

We’ve generated quite a lot of interest from other museums for our app, and are considering releasing it to the general public to have a remote view of our museum in San Diego.

Would you download it if we shared via a public store?